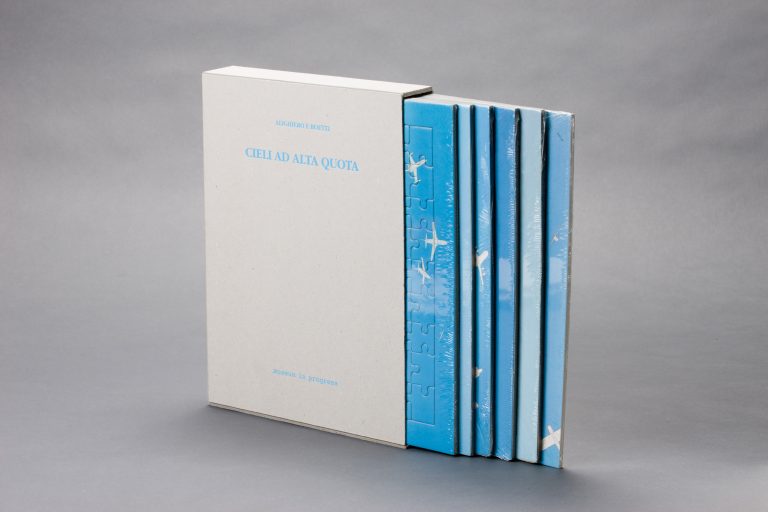 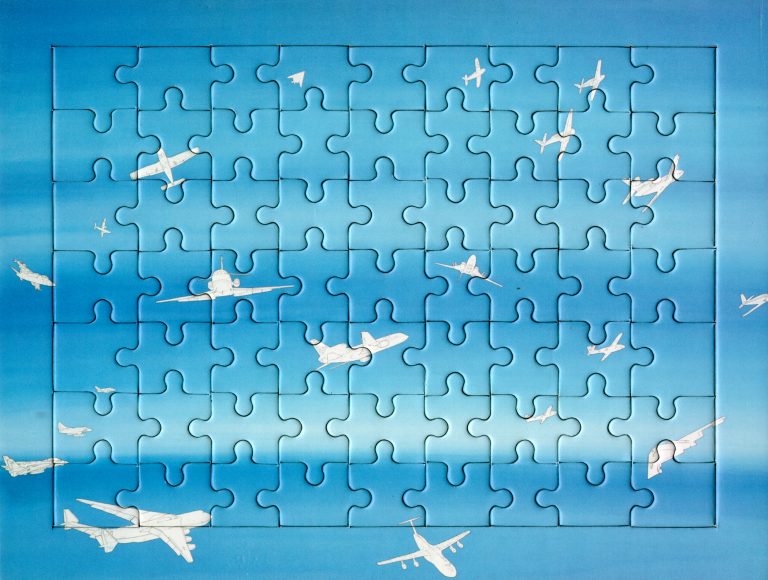 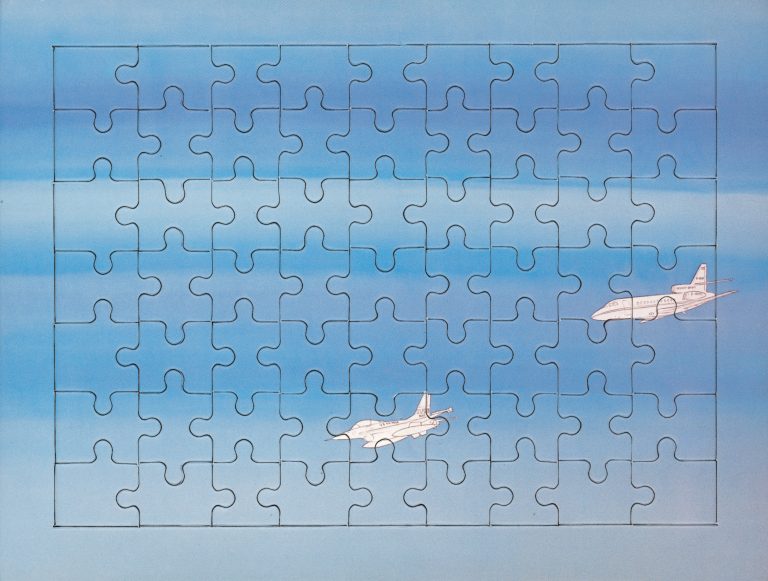 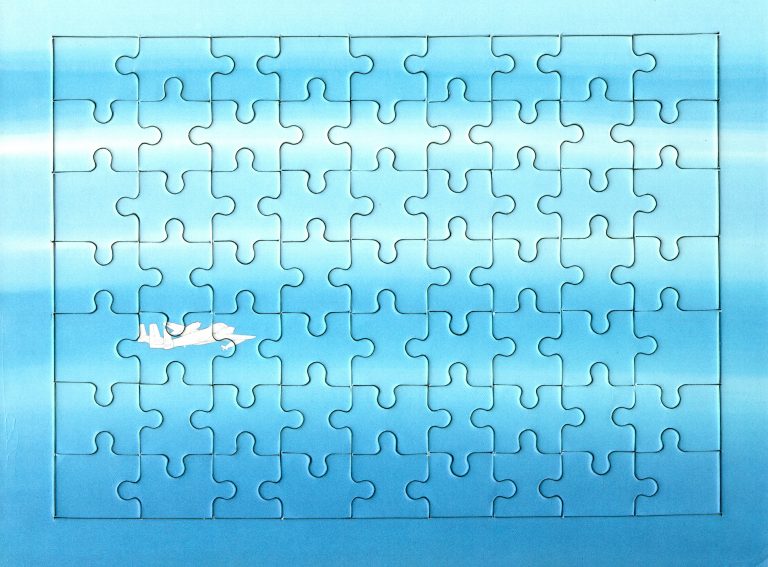 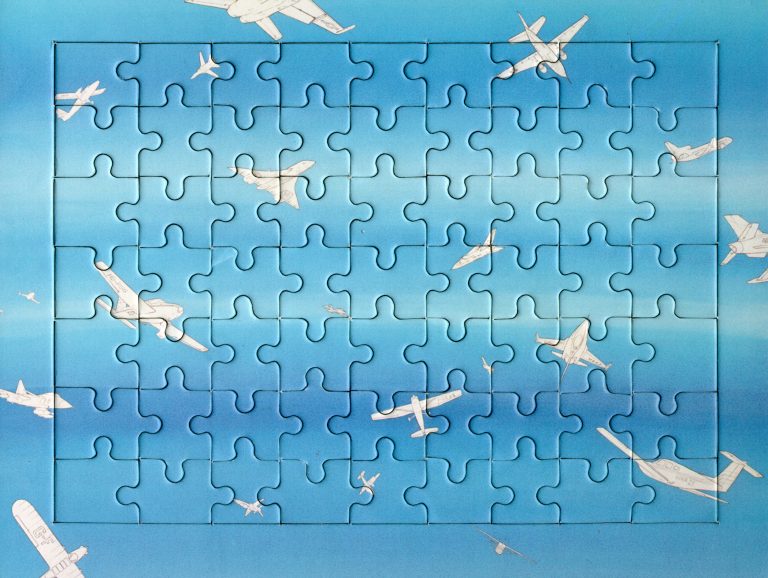 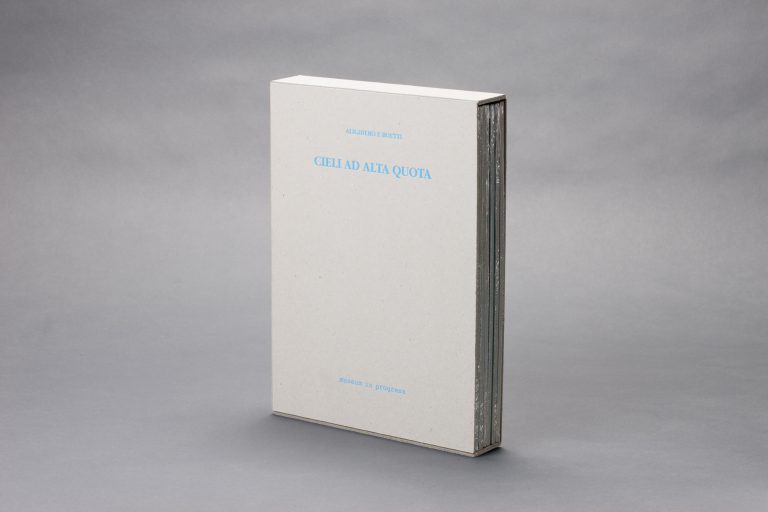 Alighiero Boetti (*1940 – 1994) is considered one of the most significant artists of Post-War European Art. His diverse body of works has been exhibited posthumously in several significant solo exhibitions at the Museum für Moderne Kunst, Frankfurt (1998), the Whitechapel Gallery (1999), Houston’s Contemporary Art Museum (2002), as well as at Museo Reina Sofia Madrid (2011), Tate Modern London and at the MoMA in New York (both in 2012), et. al.. In 2001 the Italian Pavilion at the Venice Biennale was dedicated entirely to Boetti’s work.

His series of „Aerei“ (ital. airplanes) started in the year 1977 and became a long-term ongoing series on which he was working together with the illustrator Guida Fuga.
In the early 1990s the curator Hans Ulrich Obrist asked Boetti if he could think of any unusual venues in which he would like to show his work. Boetti spoke of having an exhibition on an airplane. Obrist, along with the Museum in Progress, which involves collaborations with unorthodox venues, contacted Austrian Airlines, which subsequently published six of Boetti’s watercolor Aerei in its in-flight magazine Sky Lines. Further Boetti designed a set of jigsaw puzzles based on images of Cieli ad alta (High skies). Those six jigsaws had the same size as the folding tables of the airplanes and were given to passengers on Austrian Airlines’ flights.
With this project, the Aerie series proves emblematic of the principles at the heart of Alighiero Boetti’s art: games and chance, order and disorder (ordine et desordine).

and the editions offers a set of all six jigsaws, which was published in a collectors box as an edition of 200 by Museum in Progress. The set comes together with a certificate of authenticity issued by the museum.

Please find for your interest below some further information about Alighiero Boetti and his series of „Aerei“: